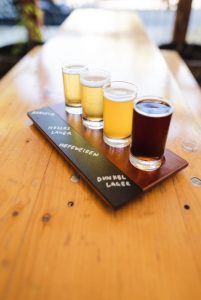 Fressen Bakery has started a Biergarten dinner program! Featuring domestic and imported German beers on draft, it also brings authentic German dishes and flavors and showcases some of Fressen’s artisan breads. With classic dishes like spaetzle, schnitzel, and sauerbraten paired with local produce. we like to think of it as German fare with Pacific Northwest flair!

Greetings, members and friends! Fall is upon us and there is a lot happening in Montavilla.

Next week, METBA is holding its annual member meeting on October 8th at Vino Veritas from 6:30 to 8:30 PM. Head on out to learn more about what we do, meet your fellow neighborhood business owners, and let us know what’s on your mind.

METBA is also hosting its quarterly mixer event in November. Stop by Blank Slate on Monday the 12th from 6:30 to 8:00 for complimentary drinks, snacks, and conversation with all of our amazing METBA members. This is a great opportunity to get to know your community.

Also in October: Come and celebrate with us on Glisan St. at our annual Harvest Festival! On October 27th, from 12:00 to 4:00 PM, our friends at Therapeutic Associates will be hosting this event with an array of fun autumnal activities for kids and families. There will be a carnival, crafts, live music, and a prize for the best costume.

With the change of season comes a change in schedule for the Montavilla Farmers Market. Their regular season comes to a close on October 28th, but there will be a Thanksgiving Market on November 18th, and winter stock-up markets in December, January, and February.

In new business news: if you haven’t yet had the chance, be sure to check out the full-fledged food cart pod on Stark and 76th. Options include Hawaiian/Korean fare from Namu, Mexican from Azul Tequila, Jamaican from Jamrock, Thai from Thai Carnation, and coffee from Nectar. We are always excited to see more options for eating local!

Also, the good folks at Threshold Brewing have been working hard all summer long to get ready for opening day and they are almost there!  Stay tuned to social media for the announcement of their grand opening, which should be happening sometime around mid to late October.

We hope to see all of you members and neighbors out and about and let’s all remember to eat, drink, and shop local this fall!

This past spring, METBA mailed a survey to households in and around Montavilla. A primary goal for the
survey was to better understand what goods and services neighbors would benefit from having within
Montavilla’s business district.

There were 245 responses to the question: What good and services are missing in Montavilla?

It may come as no surprise that “grocery store” was the overwhelming choice, mentioned in 27% of all
responses. Montavilla has been without a full-service grocery store since 2013 when Safeway closed its location at 82 nd and Burnside. While several local specialty grocers are thriving, such as La Bouffe
International Gourmet, neighbors must still travel outside of the ‘hood for their general shopping needs.

Many respondents mentioned a need for a particular service (e.g., hair/nails), a particular type of
restaurant (e.g., taqueria), or a specific type of retail (i.e., more clothes!), but specific responses varied
considerably. However, several themes arose:

A final note of interest is that many respondents were requesting goods and services that actually
already exist in Montavilla! Did you know that Montavilla already has the following types of businesses?

Are there other businesses in Montavilla that you could be taking advantage? Visit Montavilla.Biz to
view webpages for a wide variety of member businesses!

Therapeutic Associates East Portland Physical Therapy is located at 8028 NE Glisan St, #B and is open from 6am-6pm Monday-Friday.

Changes are happening fast in the City of Roses, and the Montavilla-East Tabor district is seeing them as well. Several new businesses have established their presence in the East Glisan sector of the district.

Blank Slate, which officially opened at 7201 NE Glisan Street in late May, serves craft cocktails, beer, wine and small plates in a contemporary yet cozy space. Rerun, a community re-sale store that has been in business since 2005 on NE Fremont Street, has opened a furniture annex at 6900 NE Glisan Street. The annex hours are 11 a.m. – 5 p.m., Saturday and Sunday. Last year, Rerun won “Best of Portland” honors by WW voters in the category of Best Furniture.