Abby is a former school counselor and current private practice skill-builder, supporting individual kids in reaching their happiest, best adjusted, confident and fulfilled selves as they grapple with anxiety, grief, and life transitions.

For more information about Beanstalk and to see the latest selection of quality clothing, toys, shoes and gear, visit beanstalkpdx.com or call (503) 327-8506.

We hope you can join us on Sunday, March 13th! This holiday season, Portland city and neighborhood leaders want shoppers to venture out beyond downtown and the central city.

In fact, they hope people will cross the Great Divide, also known as 82nd Avenue.

Read the full article at PortlandTribune.com

Check out their calendar of events for specials all month long! Looking for that perfect gift for mom or dad?  Check out these great new businesses in Montavilla!

Hungry Heart, a food cart that has expanded into their very own brick & mortar at 414 SE 80th Ave, dishes up cupcakes and macaroons in every delicious flavor you can think of; as well as breakfast sandwiches, coffee and pastries.   Don’t miss the special selection of cards and gifts from It’s A Gift found within Hungry Heart. 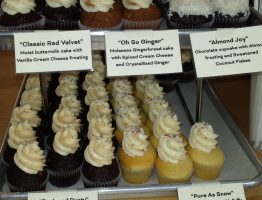 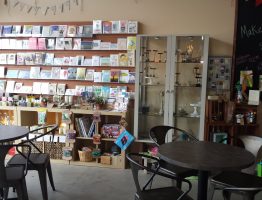 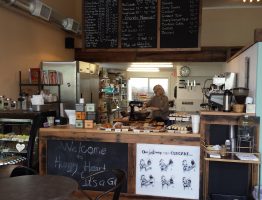 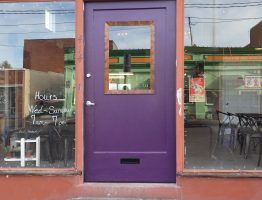 The Modern Man Barber shop in Portland Oregon at 419 SE 81st is a locally owned and operated, community minded barber shop with five locations in the greater Portland Oregon area.  Each location has it’s own unique feel, reflecting the rich history of each neighborhood, their shops are reminiscent of Portland’s early days.

Check out their website for info on their services, and how you can get a free whiskey while you wait! 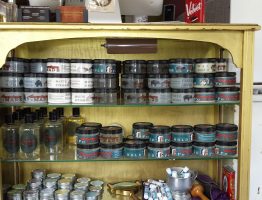 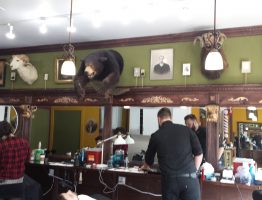 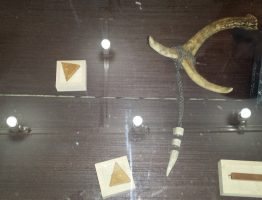 Celestial Awakenings at 7831 Se Stark St. is a New Age Metaphysical store with a wide selection of jewelry, large selection of crystals, healing wands, minerals, incense, Buddhist items, books, essential oils, candles, pagan magic and altar tools, tarot, gifts, decor, pendulums, salt lamps, local artist & authors, and so much more.  Their staff is friendly, knowledgeable and dedicated to providing quality products, and services to assist the community in building happy, healthy lives and connections. They honor all life paths, and are here to assist you on your journey. 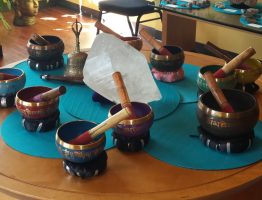 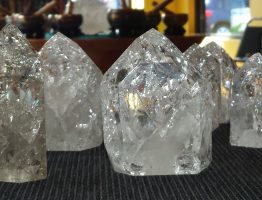 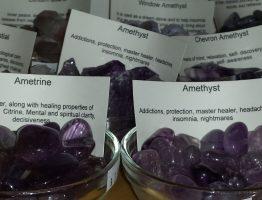 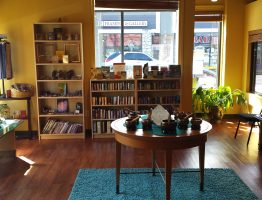 Cactus, located on the South side of Stark St. at 7910 Se Stark St is a resale/consignment store of Handmade Jewelry by Autopilot Empires, New & Used Records by Cactus Records, Clothing by Yours Vintage and much more!  Look for them on their Facebook page. 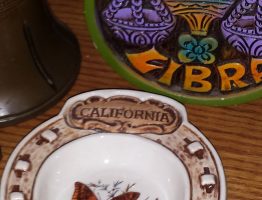 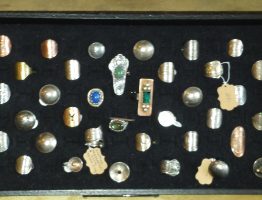 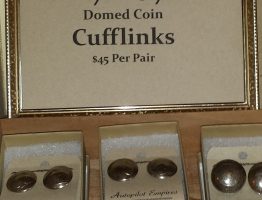 For some time now most in the neighborhood has known that we have a brewery moving in.  As anyone has seen while going to the Farmer’s Market there has been some renovation going on across the street.  And anyone who’d been so inclined to poke there head in the door was greeted by master brewer Mickael Kora.

Michael is a very friendly gentleman who is always willing to answer questions about beer and keep everyone updated of the new brewery’s progress.  In fact you can see their progress on their facebook page.  Check it out and “Like” them while your there. Hello everyone. Changes are afoot at Union Rose, and it’s time to tell you about it.

For seven years, first on MLK and now in my beloved Montavilla neighborhood, Union Rose has been THE place to find locally made stuff with soul. I have been more than proud to feature some of the best talent and designers found in Portland, and have loved bringing you my own clothing line, Big Brown Eyes. At this time, however, it’s time for me to move on, try my hand at some new things, and embrace change.

Come September, Union Rose will have a new owner. Rita Hudson-Evalt, the designer of Hubris Apparel, will take over. Hubris is one of the shop’s most popular and beloved lines, fitting women in sizes XS-3X beautifully and comfortably.

“I am so excited and honored to be taking the helm at Union Rose!” says Rita. “It was one of the first shops to carry Hubris Apparel. My line has grown into a brand sold nationally because of the kindness and encouragement that Nicole, the clientele, and the shop itself have fostered.

“I fully intend to continue to support designers’ growth in Portland and the Pacific Northwest through the best way I know – offering their products to happy customers. You can expect to see some new apparel, jewelry, and gifts in the shop soon! Of course, we’ll still carry all the lines now found at Union Rose, but I’ll work on expanding our selection as well.” FREE HOLIDAY MOVIE SCREENINGS at the Academy Theater Screenings at 2 pm, 3:45 and 5:15 pm. Have you often wondered how someone starts their own business? How an interest in clothing can become a passion for local designers and hand-made clothing? We spoke recently with Union Rose owner Nicole Prevost shortly after the 5th anniversary of her store’s opening in Portland to learn more about how she got into the business and some of the special things that she brings to our neighborhood.

Nicole is a self-proclaimed self-taught sewer, designer, marketer and business owner. After getting a BA in journalism from Louisiana State University and a professional degree in culinary arts from the Western Culinary Institute, Nicole opened Union Rose, first in North Portland and then on SE Stark and 79th.

I asked her a bunch of questions and share the answers below:

How did you teach yourself sewing? Did you take any classes? How about marketing and design?

For both, I sort of just jumped in. My mother was a fantastic seamstress. My sisters and I were notorious for finding dresses in magazines, especially prom dresses, and simply assuming that Mom could replicate them. And she always did. I never asked her to teach me to sew because I thought I wouldn’t have time for such domestic things. (From my junior year in high school, I knew I’d go into journalism and fully expected I’d live in New York and be the next Dan Rather. Yes, I’m dating myself.)

The marketing I see as an offshoot of my years in journalism. So much is social marketing now; so the writing of that stems from my training. And I think I’ve just always had an eye for design. Many people in my life have been designers, so maybe being surrounded by such talent has rubbed off on me.

What do you like about sewing? How is sewing different from pattern design?

Once I had my daughter, I wanted to make dresses for her. I started to follow patterns. I then began to learn more about drafting my own. Drafting patterns is still my least favorite part, I suppose because I’m not so accomplished at it. But I get better all the time. I love working on the garments myself, and still haven’t hired out any sewing. I’m still pretty small potatoes, though I’ve been asked to have my designs in other stores, I still produce my line, Big Brown Eyes, exclusively for Union Rose.

I thought you opened up on MLK first.

I did open on MLK 5 years ago, and had a business partner then. Our eye was, though, on Montavilla to begin with. Montavilla was smack dab in between our homes and we saw that things were about to happen there. But the recession had not yet hit and we couldn’t afford the neighborhood. When things changed a little in the Elliot neighborhood (where Union Rose was on MLK) – construction, little walking traffic, increased crime – I wasn’t going to be able to keep my doors open. The spot where my shop is now on Stark opened up, so I jumped! Took possession November 15th, kept the shop on MLK open till November 30th, and opened on Stark December 3rd. It was crazymaking, but I knew I had to open during the prime holiday season. And it paid off.

Can you tell us something about being a chef and how that experience has helped you in your current career, if it has?

Don’t know if being a chef helped, other than that it spoiled me for meaningless work. After a few years in the business, I worked at Wildwood, one of the leaders in Portland’s sustainable and local restaurant scene. I cooked there for 5 years, preparing great food that was produced in the Willamette valley, meeting farmers and working with exceptional ingredients. Though I left Wildwood to have Ella, I went back to work there because it was such a special place – but I switched gears to writing a seasonal journal, handling marketing and PR duties, serving as webmaster and doing design work. I served with Executive Chef Cory Schreiber as a member of the founding Board of Sauvie Island Center, an agricultural education center. So when it was time for me to look for other work, I didn’t want some mundane job. I’d been encouraged by my former business partner to design and sew children’s clothing and to start my own clothing line. Once the decision was made to open a shop, we knew immediately that we only wanted to sell locally made goods, and help to support others in the community directly.

What do you love about your career? What makes you good at it?

I love interacting with customers and geeking out talking ‘shop’ with other designers whose lines are carried in the shop. I have a good eye for design, I think, and appreciate good construction of a garment as much as its style. And being able to work with local designers, and spread that love, has been a great reward.

See for yourself the great designers and wonderful clothing at Union Rose. Union Rose is located at 7909 SE Stark. Our hours are Tues-Sat 10:30-6. Sunday hours for summer are 11-5. Starting in October, Sunday hours will be 12-5. Their website is unionrosepdx.com, and online store can be found on their Facebook page, facebook.com/UnionRose.

The Montavilla Street Fair is a community building event that is fun for everyone in the neighborhood.  Last year’s Street Fair was a little wet….check out the blog!  We anticipate sun and fun in 2012! 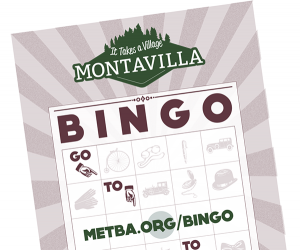 Feeling lucky?!
Play ‘bingo’ with us!